The Standard on Web Usability replaces this content. This content is archived because Common Look and Feel 2.0 Standards have been rescinded.

Archived information is provided for reference, research or recordkeeping purposes. It is not subject to the Government of Canada Web Standards and has not been altered or updated since it was archived.

This page has been archived on the Web.

Bearings  refer to the true compass and are measured clockwise from 000° (North) clockwise to 359°; those relating to lights are from seaward.

Visibility of lights is that in clear weather.

Depths  - The units used for soundings (metres, fathoms or feet) are stated in the title of each chart.

Elevations   are normally given above Higher High Water, Large Tides unless otherwise indicated.

Distances  may be calculated as follows:

Please note that, in addition to the temporary and preliminary changes normally advertised as (T) and (P) Notices, there are a few permanent changes to navigational aids that have been advertised as Preliminary Notices to Mariners while charts are being updated for new editions.

Marine Information Report & Suggestion Sheet -  Mariners are requested to notify the responsible authorities when new or suspected dangers to navigation are discovered, changes observed in aids to navigation or corrections to publications are seen to be necessary. Such communications can be made using the Marine Information Report & Suggestion Sheet inserted on the last page of each monthly edition of Notices to Mariners.

Canadian Hydrographic Service - Information Published in Section 2 Notices to Mariners -  Mariners are advised that only the most critical changes that directly affect safety to navigation are issued in Chart Corrections - Section 2. This limitation is required to ensure that charts remain as clear and easy to read as possible. As a result, mariners may see minor discrepancies of a non-critical nature between information in official publications. For example, a small change in the nominal range or height of a light may not result in the production of a chart correction, in Notices to Mariners,  but may result in a List of Light, Buoys and Fog Signals  correction.

In case of discrepancy between information provided on CHS charts related to aids to navigation, and the List of Light publication, the latter shall be deemed as containing the most up to date information

Canadian Nautical Charts & Publications -  A source list of Canadian Nautical Charts & Publications is published in Notice No. 14  of the Notices to Mariners Annual Edition April 2011. The source supply and the prices effective at the time of printing are listed. For current chart edition dates refer to the following web site: http://www.chs-shc.gc.ca/charts-cartes/paper-papier/index-eng.asp

Corrections to nautical charts will be listed in numeric order by chart number. Each chart correction listed applies only to that particular chart. Related charts, if any, will have their own specific correction listed separately.

Users should also refer to CHS Chart 1 Symbols, Abbreviations Terms for additional information pertaining to the correction of charts.

The illustration below describes the elements that will comprise a typical Section 2 chart correction.

NOTICES TO SHIPPING (WRITTEN AND BROADCAST)

The Canadian Coast Guard is implementing a number of changes to the aids to navigation system in Canada.

These changes are advertised as Notices to Shipping (Broadcast and Written) by the Canadian Coast Guard and are followed up with Notices to Mariners, then charts are updated by hand correction, reprints or new editions.

Mariners are advised that all relevant Written Notices to Shipping should be kept until superseded by Notices to Mariners or through revised charts issued by the Canadian Hydrographic Service.

Written Notices to Shipping are available on the Canadian Coast Guard Website at: www.ccg-gcc.gc.ca/eng/CCG/NOTSHIP.

The Canadian Hydrographic Service is reviewing the impact of these changes with the Canadian Coast Guard and together we are preparing an action plan on the issuing of chart revisions.

* Services provided in English and French

MONTHLY EDITION OF NOTICES TO MARINERS

We are offering a feature where subscribers to our on-line service are able to receive the complete electronic monthly edition of our Notices to Mariners. We are encouraging our clients to visit the http://www.notmar.gc.ca/subscribe/  web site to subscribe for this service.

Users wishing to receive information updates for their charts can do so by setting up a ’User Profile’ on the following web page http://www.notmar.gc.ca/search/mycharts-eng.php?czoxOToibnRtPXN0ZXBfb25lJmxhbmc9ZSI7

This feature permits users to register the nautical charts they currently have in their possession. Registrants are then automatically notified by e-mail when a Notice to Mariners is published concerning these charts.

Colour Web Patches are free to the mariner, and given the quality of many printers, should reproduce well. They will be available in real time all around the world.

CHS welcomes your feedback on this service at chsinfo@dfo-mpo.gc.ca .

The current chart edition dates can be accessed at www.chs-shc.gc.ca/charts-cartes/paper-papier/index-eng.asp

CANADIAN HYDROGRAPHIC SERVICE - PRINT ON DEMAND CHARTS - CARE AND USE.

The Sailing Directions booklet CEN 304 - Detroit River, Lake St. Clair, St. Clair River, First Edition, 1996 is now available as Print-on-Demand (POD) product. POD booklets are updated through Notices to Mariners to the date of printing. For instance, the POD version of CEN 304 now incorporates some 219 Notices to Mariners issued since 1996, which previously had to be manually added to the book. The Canadian Hydrographic Service (CHS) is converting all of its Sailing Directions to the POD format in response to requests received through our Level of Service initiative. Contact an authorized CHS dealer to purchase a new copy.

Please note that despite the new look, the content remains the same except that the Notices to Mariners have been incorporated up to the date of printing.

14.1 Caution. - Port Bowen is reported to be generally deep but a 2.1 m shoal lies close off the south entrance point. A shoal with drying rocks joins Stoney Island to the north shore and a shoal area extends about 91 m off the SE point of the island.

Delete: "Another wharf in ruins … adjacent to the wharf."

Delete: with a 150 tonne travelift, maintenance and storage area

Chapter 2 - In the vicinity of paragraph 38

Replace the GRANDE-ENTRÉE diagram with the new one provided in Section 4 of this Monthly Edition.

Replace by: 25 Beacons and Leading Lights. - Navigation beacons, situated at the southern end of Portage Island, facilitate passage over the Horse Shoe Bar.

Replace by: there is a slipway

Delete: A fish plant stands at the inner end of this wharf.

Add: The entrance to Fischells Brook is marked by starboard and port hand light buoys XE2 (175.98) and XE1 (175.99). A small wharf and slipway, used by fishers with local knowledge and small boats, are located close within the entrance; caution is advised.

Replace by: 178 Small-craft facility.-A small-craft facility is at the north end of Waiska Bay and can provide transient slips, gasoline, diesel fuel, electricity and water. In 1987, a reported controlling depth of
2 feet [0.6 m] was available in the approaches to the facility. 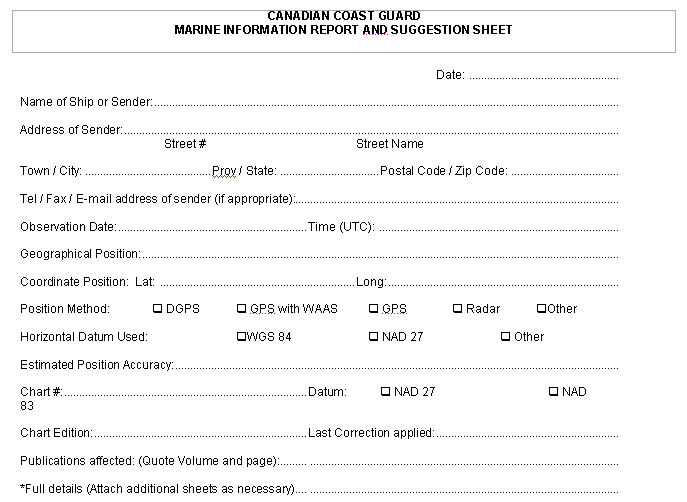 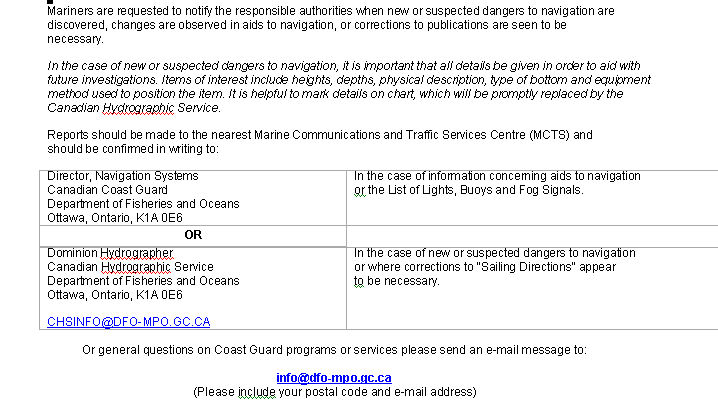